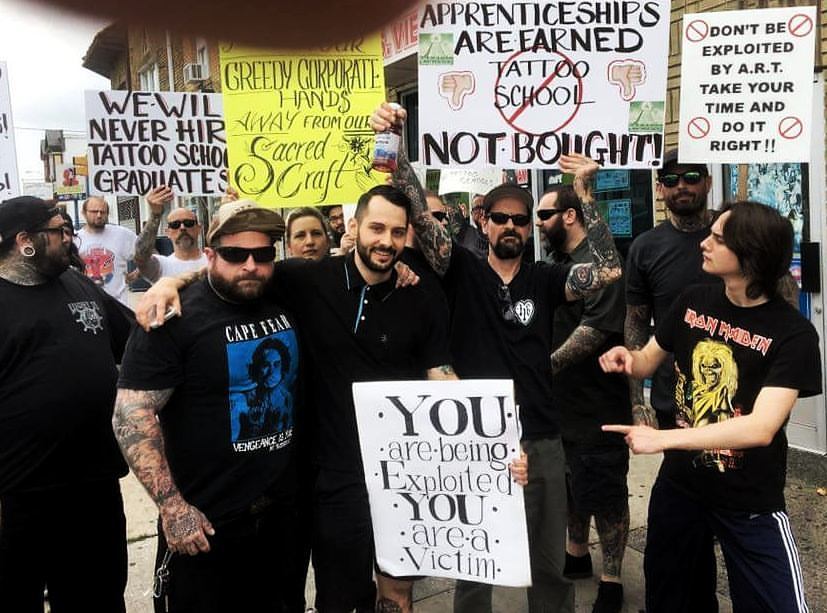 The world is changing. In the old days, these problems were solved swiftly and internally.

Today, our objective is to draw awareness to this problem through peaceful protest and public boycott of these money hungry charlatans who are a blight on tattoo culture.

Tattooers around the world are coming together to put an end to the bastardization of our sacred craft.

Traditional Tattoo Apprenticeship is an honor bestowed on a person after years of loyalty and dedication. A sacred right of passage that can not be bought and sold. It must be earned.

Tattoo school founders make a mockery of that honor by offering a "fast track", bypassing a very necessary journey into our culture. That road leads nowhere.

These would-be tattoo apprentices are being lied to and taken advantage of with the false promise of success in our trade.

No student of these schools will ever be taken seriously, or hired by legitimate tattoo shops. Period.

Drop out or Drop dead.

What are tattooers saying?

“Most of the guys who run these schools don’t know jack shit about tattooing. Because if they did, they would run a reputable shop and they would teach people right. When you take on an apprentice, that’s a three to five-year commitment and you’re with them every single day. I know with my apprentice, he’s a bonafide tattooer now but for the five years that we were together—it was every day. You have to be compatible and I don’t see how you can have that personalized training in a classroom setting. This ain’t nursing school.”

“The most upsetting thing is that they promise you, if you pay a certain amount of money, that you’re going to be a certified tattoo artist. I don’t know what the fuck that means because it doesn’t exist. You’re going to walk into my shop with a certificate that says you went to tattoo school, I’m going to tell you to get the fuck out of here. To me, it’s a joke.

The people that are the “educators” maybe have two to five years of experience, and these are guys that learned there—they’ve never been anywhere else other than the umbrella of tattoo schools. The main guy, no one knows who he is. He acts like a world famous tattoo artist, but no one knows him and his work’s terrible. And the guy who’s his partner isn’t even tattooed! He’s a money man. To me, this is corporate tattooing. But that’s not what tattooing is about.

This is something that’s handed down from a mentor to a mentee. I hung out in shops and got tattooed, if I saw something out of place I fixed it or saw something that was dirty, I clean it. And that was even before I had my foot in the door. No one is willing to do that these days. They watch TV and say ‘I can do that.’ I would say that 90% of the people taking these classes are basically customers. We make it look easy because we’ve been doing it so long and they think that it’s easy. And the tattoo schools say it’s that easy, which it’s not. They’re basically scamming people. I’ve heard about 50 horror stories within the last month of people who’ve gone there.” 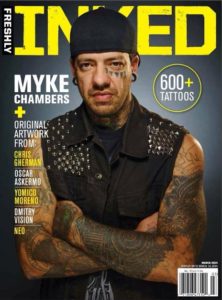 “These schools are in no way accredited. They are not licensed by the board of education anywhere. They’re not zoned as schools and they’re charging people thousands of dollars to learn nothing.

I’ve had people who have gone to these schools come to me and tell me how terrible they are. They try to get you to get a loan so that you can pay for it all upfront.

Whenever I was at the protests, it was mostly immigrants who were attending these schools. It was young girls from South America and they’d just come here saying that they couldn’t learn to tattoo over there.

They’re also targeting Veterans and giving them a discounted rate. They’re taking money from the VA but they’re not an accredited school. To be clear, they’re just interested in the money.”

“The certificate they are given isn’t worth the paper it is printed on. No legitimate shop will recognize it to give you a job. Quite the opposite actually. It tells a potential employer that this person took a shortcut into the business and questions the integrity of that individual.

Being a great artist is one thing but compromising your education and bypassing the journey of a formal Apprenticeship speaks more about that person than how great of an artist they might be.”

“If legitimate tattoo artists unite and stand together we can eradicate this nonsense. There can be no lukewarm position on the issue. This particular school is adamantly against us. They claim that they are responsible inferring we are not. The people at the top of this organization are not even rooted in our business so how can they attempt to make that sort of unfounded claim.

The school is against that mentality. I personally cannot accept that type of thinking. If the public is educated and the victims of this scam see the light this kind of place will cease to exist. If everyone stays unyielding in this movement our message will prevail.”